When it rains it pours

I'm not the biggest fan of C5s.  Once you get caught in one it becomes a rolling highway of C5's with very few connections to lower class space.  This would be ok if those C5's weren't empty and lacking in content, but the majority that I come across don't have much happening.  So my adventure tonight begins with the uneventful login to a deserted C5. I throw probes at the new signatures that are present, hoping to find a C4 or something.  Aha - a EOL frigate hole to null sec - that will do.

I emerge from session change and do the normal things, bookmark the hole, dscan, recloak back up, but no hurry, local is empty but for myself.  A quick look at the system designation has me doing a double take and a quick search to make sure - yes it is the same system.

B-R, where a little over a year and a half ago over 7,000 capsuleers participated in the destruction of over $300,000 USD worth of Internet Spaceships in a battle lasting over 21 hours, all over an unpaid sov bill.  It's just a smidge quieter now, but the presence of the Titan graveyard is awesome and indicative of just how special New Eden is - there is no other game out there that I know of that player actions can have a lasting effect on the game environment in such a way as you can in Eve.

I've discovered that having local makes you lazy.  I mosey about getting my selfie screenshot of the Titan graveyard, refit to my dual painter setup and lazily dump probes to scan down the other signatures, all safe in the knowledge that there isn't anyone sneaking up to gank me.  As luck would have it we have another wormhole so I grab the mobile depot and head over to more dangerous space.  Ok, back to business, I find myself a C3 and a lonesome MTU.  Littering in W space, tsk tsk.  I quickly ensure that the natural order of things is restored. 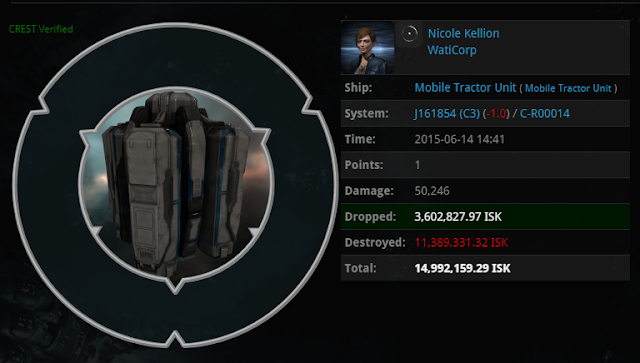 Feeling slightly less soiled I push on, hoping to find some real content to keep me entertained.  Onwards to another C3 where I find a Gila and Cyanbal sitting in their POS.  I watch for a while before getting probes out and scanning everything down.  I take my time a bit bookmarking all the sites after scanning and the lack of activity after my probes are recalled seems to assure the locals that I'm gone - dscan shows wrecks on scan.  I quickly determine which combat anomaly the residents are running and warp in at 100km to have a look. 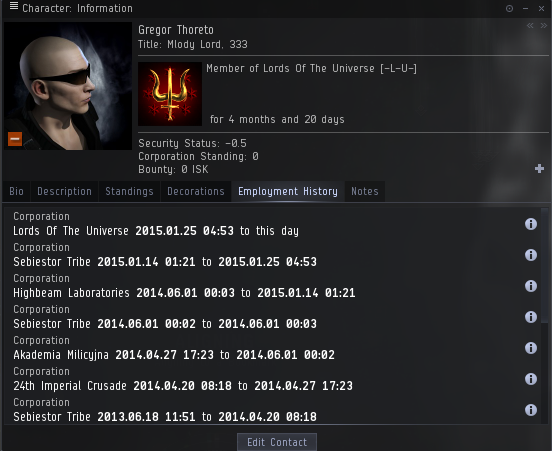 They appear to be having trouble with the two webbing battleships at the end of the anomaly as they keep warping off, but I don't mind all that much as it gives me time to make a nice tactical perch.  The fact they keep coming back reassures me they will also finish the site, and when they do something will be sure to come along for the salvaging and that's when I'll get my shot.  They eventually finish killing sleepers and the Gila warps off to their tower.  The Cynabal stays in the site.  Hmmmnnn, this could mess things up for me.  If he stays in the site I can pretty much guarantee I'll be in a pod if I have a crack at the Thrasher that warps back into the site.  I warp down from my perch 30km out and start moving into position to execute the gank while making sure that the Thrasher is in fact equipped with salvagers and not something nasty like autocannons all the while keeping a close eye on the Cynabal.

My potential headache removes itself when the Cyanbal warps back to it's POS just as the Thrasher starts salvaging.  I orbit the Minnie destroyer and wait until he's on the last wreck before decloaking and letting fly.  He doesn't last long but unfortunately the pod gets clear. 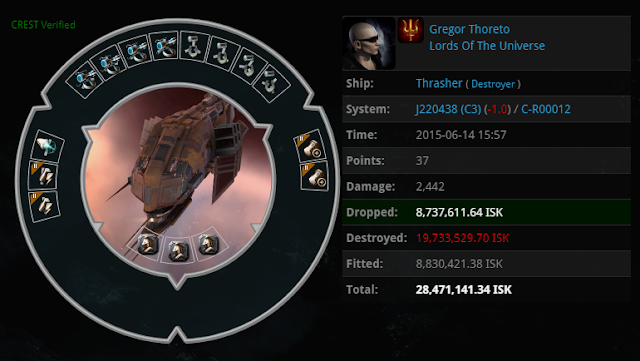 Not bad.  I'll take it.  But the night is still young.  Not really, it is way past my bedtime, but I'll keep going.  There is a Highsec hole in this system, I'll jump to K space to sell my ill gotten loot from the MTU I popped earlier and maybe see if there is another wormhole I can quickly dive into, as the C3 chain I'm in has hit a dead end.  I sell my loot and make a few jumps over before I find another wormhole.  It's a C2 and dscan again lights up my night. 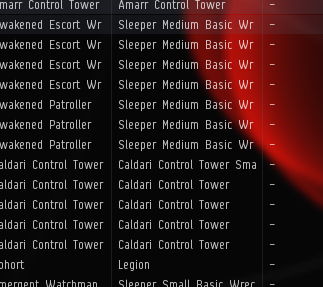 This time we have a Legion and an Eagle running the site, and due to it being a C2 they are completing it with ease.  I don't have much time so I go about setting up my perch while keeping an eye on these guys at work.  I haven't had a chance to scope out the rest of the system as I warped straight to this anomaly so there is a bit of fog of war about what else might be at the outer planets, but I don't really want to move off until I have my perch set.  However, sweeping dscan around while I wait does shows me something intriguing:

Surely they won't will they?  I don't understand why people would use a Noctis when a MTU and cheap dessie will do the job just fine and for a fraction of the co....  ahhh... I retract the previous statement, everyone in wormhole space should ditch their MTU's and just use a Noctis.  They are way more efficient, look much cooler and are definitely NOT a target I would try to gank at every opportunity. 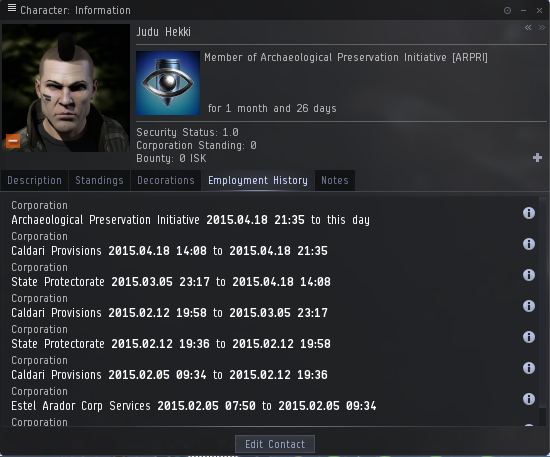 Wow, this night just got really exciting.  I move myself into position while the Legion and Eagle warp off to their POS.  I'm setting up for a drive by, starting 20km from the Noctis just inside point range with my bomber aligned to my perch so my trajectory will take me within a couple of kilometers from the Noctis, but keeping me aligned for when he friends come to save him.  By starting at the edge of point range I also give maximum time for the gank to be completed, as my ship will need to cover 40km before my target is back out of point range on the other side.  I wait until the Noctis starts on the final set of wrecks, align to the perch, declock, lock, overload everything and then keep an eye on dscan.

The Noctis is deep into structure when the Legion and Eagle finally land on grid and time seems to stretch out while I'm waiting for my next volley of torps to fly.  It seems to take an eternity for the reload cycle to complete, all the while I'm keeping a close eye out for impending doom of my ship via the flashing yellow targeting box.  Yellow boxes on the overview - discretion takes the better part of valour and I warp to my perch.  So, so so close.  I quickly warp back down to my warp in point hoping to decloak, get 1 or 2 volleys off again but the Noctis is aligning out and warps before I can get in position.

The Noctis pilot, Judu Hekki, confirms that it was a tight run thing, with his ship being at 27% structure - that's 864 structure HP.  One more volley probably would have done it, but I was pretty close to being targeted with all the associated squashiness that a targeted bomber experiences.  *Sigh*.  All in all I'm pretty happy with my night's work though, it's been one of the most productive nights so far.  I got a couple of kills, was a lot better in terms of my situational awareness compared with my last tangle with a Noctis even though I still managed to burn out a target painter and my warp disruptor near the end of the fight.  It's at this point though I have to hang my head in shame - I'm a stealth bomber pilot using torpedoes and I have Torpedoes and Warhead Upgrades only at level 4 - training those to 5 would have given me an additional 5% and 2% damage respectively.  I'm pretty sure 7% extra damage over the course of 8 volleys would have given me that extra 864 damage.