Long time no post.  Short story is I had a break from Eve, but managed to convince my brother to play Eve again when the Ascension update came through.  We decided we didn't like being Alphas and started roaming wormholes with Omega clones.  We killed a guy in an Astero, who was really cool and gave us docking rights at his Fortizar (Hi Flo!!!) and we eventually joined his alliance and are now renting out the Fortizar in a C2 with a B274 and Z647 statics.

I've skilled up into interdictors and I really like being able to warp around at 8AU a second and bubble things.  I've tried Proteus Smartbombing (fun!), PI in wormhole space and even had an alt join a Nullsec alliance for dank VNI ticks.

We had a few active connections the other night, including a frigate hole to nullsec.  We were in the process of trying to catch a Bustard that we had seen jump into highsec.  I was cloaked up in my Heretic on a C2 connection, Aj was on the high sec hole in his Stratios.  The plan was pop a bubble on the C2 when the highsec connection flashed and hope that the Bustard would warp straight to the hole without checking.  Turns out the Bustard was watching and burnt back to the hole, which was a shame.

However, there was a Heron that was busy scanning in the hole at the time we tried to spring the trap. I narrowed the Heron down to a planet and thought what the hell, I'll warp to it at a random range and see if I can't catch it.  I landed 30km off the Heron and started burning towards it, but it warped off, so I warped to the high sec connection and bubbled the hole to hopefully catch him if he panic warped back to highsec.  Nothing happened, so I reloaded my interdiction sphere launcher.

At this point, an Atron appeared on dscan.  Ok, that's cool.  Hang on, the Atron is landing at my bubble here at the high sec hole.  I was a little concerned on how my Heretic would fare against a combat fit Atron, but Aj was on his way in the Strat.  I burnt towards him, takes forever to start locking and I can't launch another bubble because the launcher isn't quite done reloading, so the Atron is able to warp off, to the sun.  So I follow and land next to the frigate just as my interdiction sphere launcher allows me to launch my bubbly goodness.  I kill the frigate, and Aj is able to get in on the pod.

It's when I loot the Atron wreck that this kill becomes a bit unusual.  I believe my words on comms were along the lines of "Holy Shit I have 1.1 billion in loot": 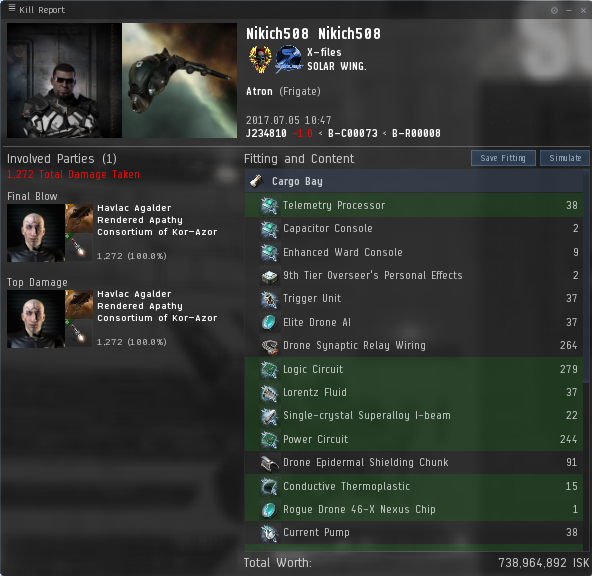 Unfit Transport Atron and Pod, cause hull tanking your expensive loot is the best way to go.

And to top it off we killed the Heron and Pod not long after.