PvP in EVE is a lot like public speaking.

PvP in Eve is a lot like public speaking. Interesting premise to start with I know, so let's quickly examine the two.  Both have a ton of guides out there on the internet to help you speak/PvP better, easier, fun-er.  Both involve communicating with an audience (I use both terms loosely) in a public setting, although the exact medium of communication differs with one involving verbal communication, the other shooting live munitions in your audience's face.  To become better at both requires practice, around the 10th time you speak in public you'll be fully confident and enjoy the experience, likewise the Eve Wiki newbie PVP guide recommends that you go out and sacrifice 20 frigates to the PvP gods to get started.  A bad public speaking experience can condition someone to never engage in public speaking again while a bad PvP experience in Eve can lead to a rage quit.  Both scenarios entail a certain element of risk - on the one hand you may find yourself publically ridiculed, ostracized and banned from speaking at any future family gatherings while on the other you can lose a fictional bunch of pixels in an internet spaceships game.  Ok, maybe they're not the same, with the exception being if you end up as an ALOD.

The fear of public speaking is known as Glossophobia, which is derived from Greek and means tongue and fear or dread.  Common symptoms of Glossophobia include:

I reckon when I know I'm about to have a fight in Eve I experience numbers 2, 5, 6 (excluding anything my wife says to me), 7, 9, 10 and both 11 and 12 (pending lab results).  8 of 10 symptoms - that's a pretty close match.  When I'm getting in position to execute a gank I tend to get a little bit light headed, my heart rate noticeably increases and I pretty sure my face gets flushed.  Physically I experienced the same thing when prepared to give me best man's speech at my mates wedding, or when speaking to an angry customer over phone at work.  My ability to manage all the information that the Eve client is displaying also tends to decrease and the focus of my attention narrows quite a bit, I tend to lose what little situational awareness I may have.  To illustrate I have previously lost a ship while trying to ambush an explorer and only realised there was a Loki on grid when I looked at the kill mail.  I've also noted on various other blogs that a lot of people get the "Shakes" when PvP'ing and I know first hand that I've caused such a physical reaction on an intended victim.  Back when I was living in my wormhole I ambushed an Astero at a Data site, but unfortunately I had swapped my prop mod out for a 3rd scramber as I'd been having trouble catching people with stabs.  He was afterburner fit, burned out of scram range and warped out.  I convoed him afterwards to congratulate him on getting away and the first thing he said was:

John Hexis> Dude, heart was RACING, that was fun as hell

Adrenaline kicks in, fight or flight, kill or be killed.  It's interesting to me that fictional Internet Spaceships can generate such a response from me (and others it seems).  I haven't yet played a game that can provoke anywhere near the same kind of reaction and I fully believe the mechanics of the game world promote this.  For me, losing a ship in Eve matters, I'm not space rich and only have a limited pool of ISK to replace my losses before I will be forced towards ISK generating activities which are time consuming, an order of magnitude less fun and for the most part PvE.  The fear of losing my ship that I have sunk time and effort into obtaining creates a tangible physical reaction.

It's often said that Eve has a steep learning curve, but I think that once you get past the initial mechanics of exactly how to do things it's not that bad - there is plenty of information out there if you are willing to look for it.  What truly differentiates Eve from other games is that it punishes your mistakes in a tangible way, so when you stuff up, you really know about it. This leads on to my latest adventures.  I have had a bit of a frustrating week in terms of actually finding someone to shoot at.  On the other hand I been able to do some sightseeing.  It's pretty much a given that when you see non sisters core probes on dscan that there's probably a tech 1 probing frigate somewhere in system, and so it was in a C2 that I was hanging out in.  However, after around 10 seconds of a Minmatar Probe being on dscan it occurred to me that this guy may have forgotten to cloak up after firing off probes.  I quickly worked out that this guy is at the Highsec static and warped over at 30 to have a look.  There he is, sitting right on the wormhole.  Smart boy, if something jumps him he'll enter the wormhole and be safe.  I figure I'll wait until he finds one of the 2 data sites in this system and then I'll try to gank his ganker as I know there has been a Hound flying around this system recently and the odds are high that he will get jumped mid hack.  In the meantime I get a nice shot with the wormhole in the background.


However, the locals scuttle any such plan by warping to zero on the highsec hole.

The Probe jumps through the wormhole as expected, the Hound disappears and the Thrasher sits there, hoping to catch the Probe jumping back through and possibly polarising itself.  But he's not coming back, and I take the time to take a couple of artistic shots for you all.

I move on and eventually find a massive C3, it's probably around 120 AU across.  I find a Loki sitting at the only tower in system and get to work scanning all the signatures outside dscan range of the tower.  I complete the first 3 sigs before moving onto a couple that are a little bit closer to the active tower, so I decide to warp to the tower to keep tabs on the Loki pilot.  He hasn't moved, chirp chirp chirp, move the probes.  A damage notification flashes up on my screen, and my heart sinks.  I try to align out but I already know that I'm stuffed.  A couple more shots and I'm in my pod.  I know there are no decloaking hazards this far away from the tower and I rapidly deduce that I've made the little, tiny, fatal mistake of forgetting to cloak back up after launching probes.  Several expletives later I get my pod away from the tower and start the self destruct on my pod - there is no way I'm going to leg it back to Rens from where I am and I have a new Manticore waiting for me there.  Man I hate towers, most of my losses in bombers have been to towers due to stupid shit exactly like this.  I'm pretty pissed off at myself by this stage and I logout for the day just as my new clone awakens.

I've got a suggestion for CCP that would help alleviate this problem - it shouldn't take much to code and would very much fall under the banner of a quality of life improvement.  I suggest a subtle little reminder pop up, just like a combat message notification, whenever you are in a ship with a cloak fitted that isn't activated and the true sec of the system the ship is below 0.5.  I've done a little mock up below and I think you agree this would prevent any further such idiocy on my behalf in the future:

When I return I make my way back to Rens to grab a new Manticore, stealthily named "Mobile Depot" and resolve myself to always double check my cloak after dropping probes.  We'll see how long that keeps me out of trouble.  Eve must be sensing my frustration and provides me with the following on Dscan in the first C1 that I jump into.

I'm concerned that the Prospect might be at a gas site which would need scanning down, but no, it's at an ore site and best of all the Jackdaw is not present.

Now the issue with this Prospect is getting a lock on it before it cloaks up.  I'm also concerned on the whereabouts of this Jackdaw on dscan, but a 1AU scan shows it's nowhere near me.  I warp to a convenient rock at 20km which puts me 30km above the Prospect.  The crowd quietens and the spotlight goes on as I nervously approach the pulpit.  To settle myself I orbit at 15 before decloaking and clearing my throat.  Every eye is upon me and I'm buzzing when I realise I have the audience fully locked and disrupted.  I begin slinging torpedo anecdotes, each more boisterous and amusing as the last and my audience is enraptured - they are fully captivated by the experience, or AFK.  I have a small hiccup when I try to take a screenshot - the screen capture software I've been experimenting with to record my experiences helpfully puts a full screen dialog box over the Eve client when I hit ALT PRNT SCRN, momentarily throwing my off my train of thought but I recover with a rip roaring joke about how I walk away from explosions, not because it looks cool, but to decrease my sig radius. The Prospect collapses in a fit of side splitting, atmospheric venting explosions. 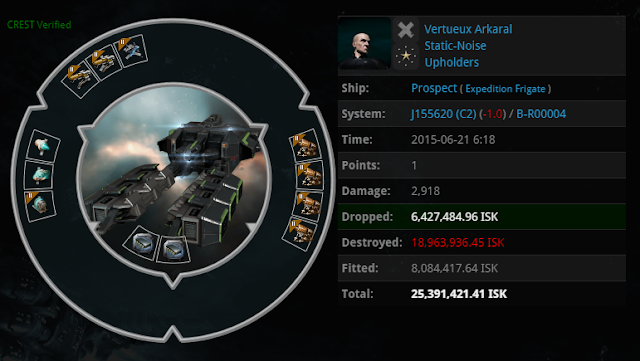 A Garmur in the crowd rises to it's feet in applause as the pod warps off and I destroy the Prospect wreck.  I respectfully decline signing any autographs, as I have another gathering to attend but I do wave appreciatively at the Garmur while making my way off the stage, cloaking up as I go and warping off.
Posted by Havlac Agalder at 00:39