I have managed to find some time to play my main after things have settled down a bit at work and on my travels along the winding ways of wormhole space I stumbled into a C1 and started scanning down all of the signatures.  I had two signatures to go when a local logs in at the tower I'm perched at.  I quickly pull my probes and find the locals have put out something that piques my interest.

Very interesting.  A quick check on the local corporation shows it's only 4 man strong and with a short history of losing mining ships on Zkillboard - it appears the corp has only been established in June of this year.  I decide this may be the perfect spot to set up camp, so I watchlist all of the corp members and settle in to see what they do.

The Covetor logs and in it's place a Stratios under a different character logs in.  It becomes apparent that these two characters must be on the same account, as one logs off, the other logs in - they are never online at the same time.

The Stratios warps over to a gas site and starts clearing the sleepers that are present.  I make a perch but I'm not hopeful of getting any action, as a Stratios doing sites usually carries salvaging drones, and this proves to be the case here.  However, the pilot leaves a couple of cargo containers it the site and warps off to their tower before the notification chimes that the Stratios is no longer online.  A second notification chimes - the Covetor pilot is back on line.  I perch up on the tower and watch the Covetor swapped for a Venture. 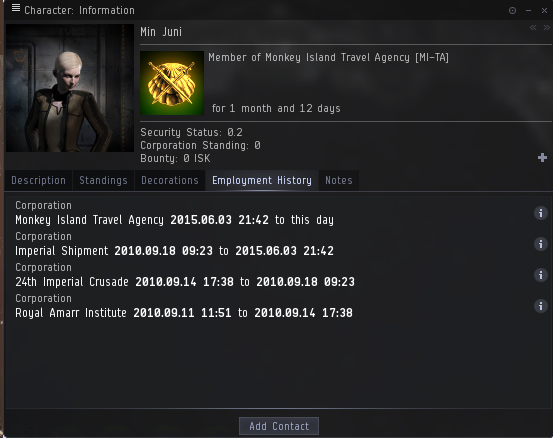 Thankfully there is an outside planet well off Dscan range that I can refit to my Venture killing fit with dual scrams so I warp off to get myself equipped.  Once tooled up, I warp back to the tower and try to re-acquire this Venture.  After a bit of swinging Dscan around I finally narrow the Venture down to one of the outer planets that is around 20AU from the tower, but here's the rub - I hadn't been able to scan the two signatures around this planet before the locals logged in.  Ok, I drop probes off Dscan range and do my best to narrow down the signature via Dscan before activating the probes.  Once they have finished scanning I pull them immediately, but it appears my use of Dsan isn't up to scratch, as I don't get a hit.  I move back out of range and drop probes again, this time getting a weak hit on the site.  But it appears that the Venture pilot was paying attention as I see them warping back the tower.  The Venture logs, the Stratios logs in and disappears, throwing core probes into the ether.

Around 15 minutes later the characters swap again and the Venture heads back to the same gas site.  I try again with the core probes, but it takes two efforts to get a warp in and again my probes were spotted.  The Venture warps back to their tower and probably getting the feeling that there is someone close by with not the best of intentions they log for the night.

Well that's pretty frustrating, but it does give me time to reflect on my process.  So I know where this Venture returns to, and from what direction - I've been going about this all arse-backwards.  How about instead of trying to find the grid the Venture is on, why don't I let the Venture come to me?  With that in mind I finish scanning the signatures and work my way 450 kilometres behind the POS and roughly in line with the two gas signatures at the outer planet.  I drop a bookmark before logging out for the night.

Next morning I log my trading alt in and add Min Juni as a watchlist contact.  I leave the client running all day and check in on it now and then.  Early evening a notification chimes - Min Juni is back online.  I swap accounts and scope out whats going on and sure enough the Venture is back at the same gas site.  I get in position and prepare my trap. 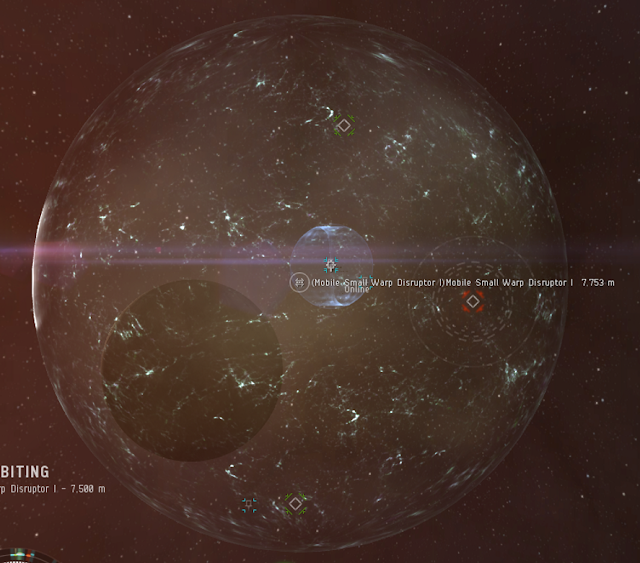 I had already dropped probes when I logged in, so it's a simple matter of moving them on top of the gas site and waiting.  Attentive as always, it's not long before I see the Venture on Dscan.  It's at this point that things go a bit awry.

The Venture lands on the very edge of the bubble and as you can see above I've been orbiting the mobile disruptor at 7500 metres - unfortunately my orbit has taken me outside of scram range.  I get a lock and send a volley of torpedoes at the Venture, hoping beyond hope that I can MWD close enough to land point but alas the Venture spools up their warp drive and blinks back to the tower.  Well that's frustrating, but a great learning experience.  Next time I'll remember that frigates don't usually go too far into the bubble when they are caught, so I'll be waiting at the front edge of the bubble in future.  I've also handily found the shortcut keys to overheat the mid slot rack so my process is now to overheat my mids whenever I jump into a system.  Next time I'll do better.