Eve by the Numbers

So I've been pretty busy in real life over the last week or so that has really restricted my play time on my main.  However, I have been able to address something that was nagging me for a while since I came back to playing - what would I do when I ran out of ISK?

I returned to Eve with the princely sum of 400 million ISK that I cleaned out of my alt corporation, but I'm losing stealth bombers at a rate of 2 a month.  At 45 million or so a pop, it's pretty easy to see that those maths would soon equal a negative balance and I would have to do something to bankroll my current lifestyle.  Originally my plan revolved around the other alt on my main account.  He was trained up to be a spotter/warpin for some highsec ganking I did in a previous life.  Not much use by himself, but he does have a mostly fitted Astero with the obligatory covert ops cloak.  The plan was to contract the Astero over to my main and go and do some exploration to get a pool of ISK together so I could fund myself for another X months before doing it all again.

The downsides to this is that I would be doing data and relic sites again and while I don't really have a problem doing that it's nowhere near as exciting as hunting.  It would also present a pretty high risk in terms of me flying my very last ship - the absolute worst case scenario would be jumping into the Astero and getting killed without getting any loot back to the market.  The idea of exploration in a tech 1 exploration frigate really doesn't appeal.

The ideal situation would be to just hunt on my main and have a mostly passive income on the alt.  With that I mind, I got to thinking about starting market trading again.  I had previously done regional trading with limited success and I thought why not?  I can move my trade goods in the Astero in relative safety with the covert ops cloak, time wise it's not an issue as I can do the runs in the background while doing other things, same thing with updating my orders, that wouldn't be too much of a time sink.  The pros are that I can make ISK without terribly affecting my playtime on the main, it's ongoing income and it can be one of the easiest ways to make ISK in the game.

So I did it - I invested 120 million ISK from my main to my (now) trading alt and splashed out to activate a second training queue so I could get some trade skills up to reduce the broker fees & sales tax all without compromising my mains level 5 skill training queues. I'm not going to bother trying to grind faction standings, as even though reduced fees would be great, I'm just not interested in grinding level 1 mission, etc.  And so I hit the pavement, doing the loop between Rens->Jita->Amarr, mainly focusing on T3 subsystems at this point for high margins and relatively low volume items.  If I ever find myself trying to carry more than can fit in the Astero's hold (haven't yet) I'll use a courier service - that way I'm limiting my potential losses on the off chance I do get ganked.

And so far it's going well.  From my initial investment of 120 million ISK I'm on track to reach 1 Billion ISK in cash and sell orders hopefully sometime next week: 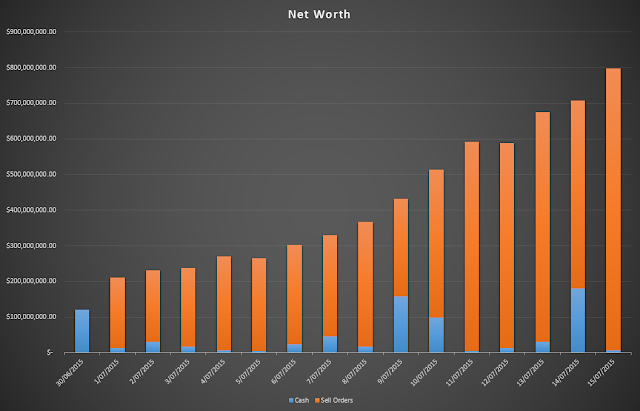 Hopefully work & real life will settle down a bit over the next week or so and I can get back to my normal adventures.  But it's nice knowing that I can go out and lose a ship without needing to change my play style.  I might even be able to plex my account, which would be nice.  The other intriguing option for further down the track might be to switch from a bomber to something with a bit larger engagement profile, like say a neut Stratios - but the fit I'm thinking of would probably be in the order of 700 million ISK, so having a money making alt would enable that as well.