I may not get you, but I will get your Alt

I've found a new C2 to hang out in, the reasons for my stay are threefold.  1.  It appears that the locals are reasonably active in my timezone 2. I couldn't be arsed logging off in another system and have to rescan everything and 3.  There is a particular ship buzzing around the system that I hope to have a chance at landing on grid with and hopefully squashing:

I don't have any luck with the Epithal for a couple of days, and the locals don't appear to be doing much else that I can interfere with.  This changes when I have a half hour after work where the rest of the family is out of the house.  I login to have a look around and see if anything new is happening.

Interesting.  I become even more interested when the Procurer warps to an ore anomaly.  I follow and land on grid and set about creating a tactical perch that I can GTFO to if needed.  It takes a little while to work out how I can get close to the Procurer without getting decloaked, but I finally work out if I warp to this particular rock at 30km I should remain cloaked. Done, I'm around 40km to the target with nothing of concern either on dscan or in terms of my approach path to the ship.  However, there is a potential problem.

I don't see any mining lasers active, so we have a miner just warping to an anomaly and just going AFK, or a potential bait ship.  I haven't done any scanning this afternoon so the chances I was spotting when I logged in are pretty slim.  But I'm a bit concerned given a Procurer can sport a pretty heavy tank for a mining barge, so if it is bait I most likely won't be able to kill it before the cloaky(ies) waiting nearby will kill me.  But what the hell, I'll decloak aligned to my perch and if there is a Proteus lurking nearby I'll (hopefully) warp off before they can lock me.  I start moving into position, but my plans are dashed when the family arrives home.  Farewell, potential bait Procurer, I will never know your true nature.

Later that night I have some play time and fully scan out the chain, there isn't a lot doing until I jump back into the hole one system away from my "Home" C2 and notice a Cheetah on scan.  It's probably just dumping probes or transiting a wormhole, it'll soon cloak up.  Or will it?

It's not cloaking up.  Swinging dscan around I quickly determine it's over at the Losec static in this system and warp over to see if it's still hanging around.  I land on grid to find the Cheetah about 115km away from me.  At this point I want to point out how much I love the sensor overlay with the bookmarks showing in space.  It makes aligning things such as bubbles a hell of a lot easier to do and it's a tremendous aid in situations such as I have here, as there is a bookmark hanging in space for the C2 static roughly inline with this Cheetah.  I'll warp to the C2 hole and warp back to the Losec hole at 100km, it will be a thousand times quicker than trying to slowboat towards it and I should land pretty close.  A bit under 10km in fact. 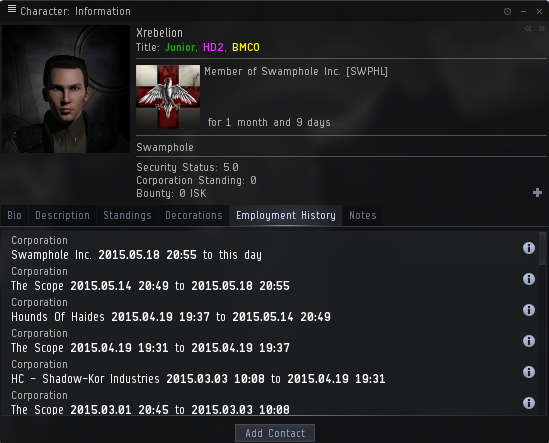 I orbit at 15km, preselect the torps, painters and disruptor, decloak and get everything that needs to be heated.  Pretty straightforward, except there are no Torpedoes streaking to my target.  Speaking of which I don't have a target - I haven't locked him up when I decloaked.  *Sigh*.  I try locking the Cheetah but my delay has given Xrebelion enough time to react, and the ship disappears in a cloud of shimmering hexagons.  I half heartedly light my microwarp drive and steer in the general direction of where the Cheetah was in a vain attempt to decloak him, but he's gone.  The game is up, the locals know I'm here and what I'm flying, it might be time to move on.  I jump back to "Home" (I'm going to call my main stalking site "Kimbo" from now on) and just manage to get cloaked up before Xrebelion and another pilot I didn't get the name of land on the hole in a pair of T3 destroyers.  I can see that my presence is not welcome here, and rapidly warp off to find greener pastures.

I'll poke a highsec connection first, with the aim of finding another wormhole to jump into.  A quick scan reveals the connection I came through is the only wormhole in system.  I'll go poke another known space connection, as I'm not feeling inclined to jump gates and I might find something in the chain as I go from K space connection to K space connection.  Before I leave though, something catches my eye on Dscan and with my interest piqued I get on grid. 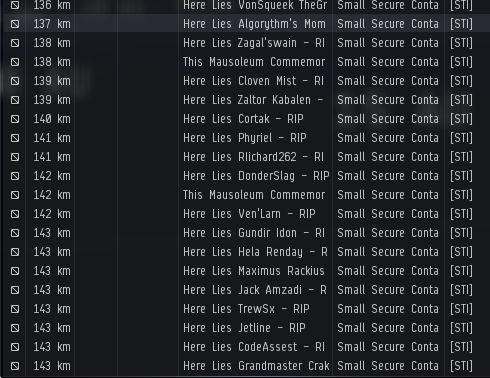 I had in fact read up on the Eve Cemetery only earlier that day while looking up trading in corpses (I have a project I'm working on that will require a few frozen corpses, but given my lack of podding lately I'm all out.  And no, I'm not in any way related to those pesky drifters, certainly involved with nothing illegal, but it could be construed as of slightly questionable taste.  I will reveal all at a later date).  The Eve Cemetery is basically a place where you can drop of the corpse of your vanquished foes or your previous clone if you so wish and the owners of the POS will organise a burial & internment in a secure cargo container so the "grave" is on display.  As you can see from the screenshots above there's certainly a lot of graves there.  Feeling slightly humbled, I decide to head back to Kimbo as it's nearly time for bed and I couldn't be bothered getting set up in another hole.

Nothing doing on the way back to Kimbo, but when I do arrive I see a new Confessor with a ship name that I haven't seen before on dscan.  I warp over to one of the local's towers and find my friend Xrebelion the Cheetah pilot now sitting in the Confessor along with a buddy in a Svipul.  As I watch the Svipul is swapped for a Catalyst - these guys sure like their destroyers.  It dawns on me that I should be saying this guy and not the plural given the similarity of the names. 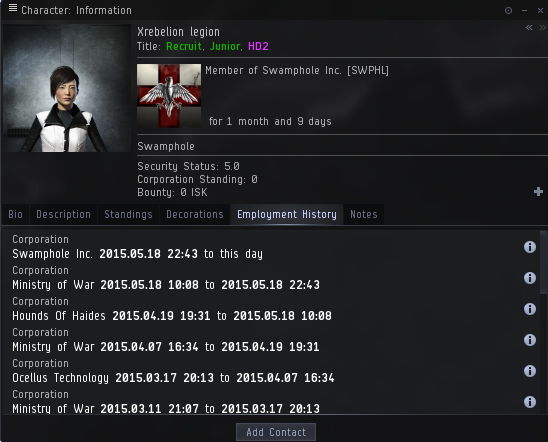 The Confessor warps off to a D382 and I follow, confident that this turn of events might mean I get a chance to redeem my inability to target earlier tonight.  I give it a couple of minutes before I follow the Confessor into the C2 where Dscan confirms I may get my chance. 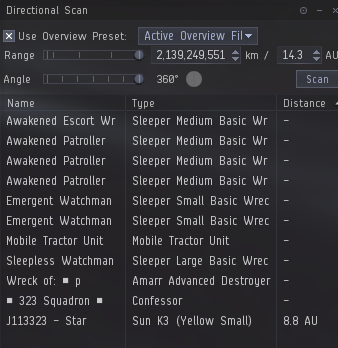 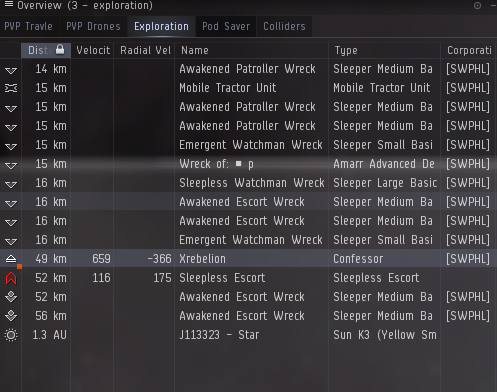 I set a tactical perch, bookmark the MTU and then get in position inside point range of the MTU in preparation for a salvager.  I can confirm that the Confessor is a boss at C2 anomalies, Xrebelion powers through the site in next to no time, which makes me wince painfully thinking of the half hour it used to take me to do the same site in a Drake.  However, there is what I assume is a Confessor wreck here from the same corporation and with the same tag on the ship name, suggesting that he's had a bit of trouble with this site previously.  No such problems this time though, and a kind of grim certainty settles over me - this Confessor is going to warp off when the site is done taking the MTU and the loot drop with him, Xrebelion's alt in the Catalyst will warp in and salvage most of the wrecks, at which point I will kill it.  I almost feel bad for the guy, but then the Catalyst lands on grid.

The Confessor lingers but for a moment before warping off back to Kimbo.  A final check that this Catalyst isn't packing blasters - Check. 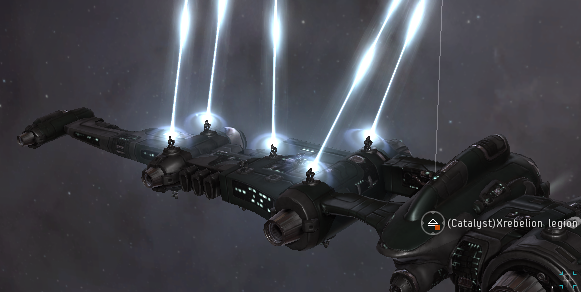 Ok lets get this right this time. 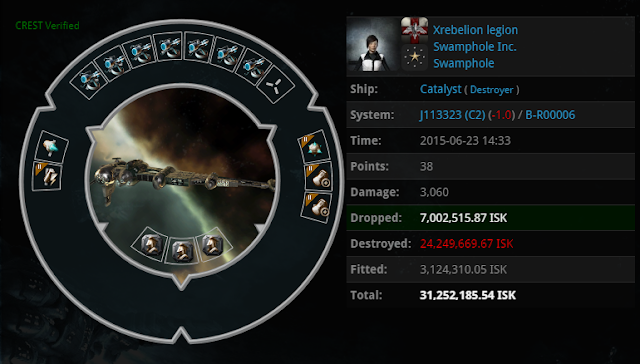 I have only the one scare when the Catalyst targets me right back after I lock him up, so I align out and get ready to hit the MWD, but it appears that he may have had auto target back set to yes.  The only way he was going to hurt me with the above setup was if I was flying a Minmatar ship.  Once again the pod gets away - I'm considering swapping a painter for a sebo to try and address that.  While I would have preferred to have nabbed the Cheetah first time round, I'll take killing someone's alt any day.
Posted by Havlac Agalder at 23:36